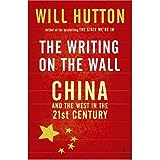 The Writing on the Wall: China and the West in the 21st Century

All of these are problems within China. But the lack of freedom is likely to affect its trade strategy as well. As its flood of exports leads to ever increasing fears of job loss and reduced wages in the United States, there will be a strong temptation on the part of the American government to exploit human rights violations as a way of rolling back Chinese goods.

The question, then, is whether, the Chinese Communists will be able to make the necessary accommodations... Or will China’s leaders dig in their heels, suppressing dissent and opposition and possibly precipitating political and economic chaos? It’s anybody’s guess; and Hutton is not particularly helpful on this matter.

He does think, however, that the West can actively help the Chinese make the wiser choice, and a major part of his book ... is devoted to arguing for engagement rather than confrontation.

But the question, frankly, is: How does one make an 800-pound gorilla move in the right direction?